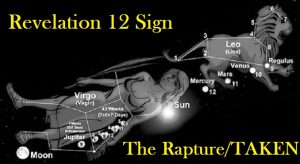 14 But The Woman was given two wings of a great eagle, that she might fly into The Wilderness to her place, where she is nourished for a time and times and half a time, from the presence of the serpent.

I saw the Rapture as it happened but it was not precisely the Rapture in the way that general prophecy writers depict.

I call what most call The Rapture, as The TAKEN:

Then two men will be in the field: one will be TAKEN and the other left.

Two women will be grinding at the mill: one will be TAKEN and the other left.

I tell you, in that night there will be two in one bed: the one will be TAKEN and the other will be left.

Two women will be grinding together: the one will be TAKEN and the other left.

Two men will be in the field: the one will be TAKEN and the other left.

This TAKEN/Rapture event will be localized to a specific location on the earth.  Revelation 12:14 tells us, but almost no one really notices, The Woman is raptured/TAKEN to a place on the physical earth where Satan is not allowed to go:

14 But The Woman was given two wings of a great eagle, that she might fly into The Wilderness to her place, where she is nourished for a time and times and half a time, from the presence of the serpent.

The place on the earth where people are TAKEN/Raptured to is a well known place and all the world will witness the aftermath of these events as they happen, TV/Internet Livestream, and after they happen, but Satan cannot go there.

Satan is a spirit, so how can he not go there?

God’s Son and his angels physically prevent Satan from going there but of course Satan is allowed free reign on the rest of the earth where over 7 Billion people are.

As for the rest of the entire earth, all the people in the entire earth who are of The 5 Wise Virgins are instantly Raptured/TAKEN to The Wilderness.  This is a very small group of people and will hardly be noticed compared to the 5 Foolish Virgins debacle.

I saw everything in slow motion but these events happen in the blink of an eye.  When Jesus/Yeshua ascended to heaven in Acts 1:9 he was TAKEN up very quickly but not so quickly that the Apostles did not realize where he had gone.  Then the angels ask the men why they are gazing up to heaven?  This is just like rubbernecking at an accident on the highway except the necks and heads go up!  The angels tell the Apostles Yeshua will return in like manner…  My guess, and it is just a guess, is something like a Trumpet will sound, at some point after the Rapture/TAKEN, and all the world will be watching on TV as Yeshua returns, to The Wilderness but they will not realize it but what they see will astound them and they will know something very dramatic just occurred.

But back to The Rapture/TAKEN…

What I understood, in early 2012, is this is the sequence of events of the First Resurrection, in Revelation 12:14.

Which means while the events I described above are going on there are other events happening at the very same time.  All the 5 Wise Virgins who have died throughout all human history are instantly resurrected from their graves and instantly meet, IN THE AIR, all the living 5 Wise Virgins, for a brief second as both groups are being Raptured/TAKEN into The Wilderness to be nurtured by Yeshua/Jesus and our Father YHVH for 1260 days.

But what about those 5 Foolish Virgins?  See Revelation 12:17

Can you visualize these events in your mind?

Add to those events, one last event.  Satan is currently alive and well inside the physical location of The Wilderness of Revelation 12:14,  on the earth.  But, at or before The Rapture/TAKEN, Satan is cast outside The Wilderness and not allowed to return and this makes him very angry.

17 And the dragon was enraged with The Woman, and he went to make war with the rest of her OFFSPRING, who keep The Commandments of God and have the testimony of Jesus Christ (Yeshua Mashiach).

From their graves, The 5 Foolish Virgins are also Raptured/TAKEN into the earth outside of The Wilderness of Revelation 12:14  They wake up and know something is very wrong.

The wicked who have died throughout history who never made it into the 5 Foolish Virgins category are left in their graves and await the Second Resurrection, before The Judgment, at the end of the 7th Millennium.

How do believers be sure which set of either Wise or Foolish Virgins they are categorized as?

That question is answered in the verses of Revelation and many other places:

17 …who keep The Commandments of God and have the testimony of Jesus Christ (Yeshua Mashiach).

Here is the patience of the saints; here are those who keep the commandments of God and the faith of Jesus/Yeshua.

14 Blessed are those who do His Commandments, that they may have the right to the tree of life, and may enter through the gates into the city.

16 Now behold, one came and said to Him, “Good Teacher, what good thing shall I do that I may have eternal life?”

17 So He said to him, “Why do you call Me good? No one is good but One, that is, God. But if you want to enter into life, keep the Commandments.”

If you are lacking in any of these areas, then you are probably one of the 5 Foolish Virgins and probably do not know it.

What do you do if you fear you are of The 5 Foolish Virgins, after reading all these verses and studying and examining yourself very carefully?

Simply repent with all your heart, soul, mind, and strength, asking Jesus and his Father YHVH to forgive you, and do whatever you have to do to keep those Commandments.

As Jesus states specifically in Matthew 19:16-17, eternal life (salvation) is obtained by keeping those Commandments.

Believe/obey Jesus!  Trust him.  Obey him in ALL THINGS.

In a subsequent writing, I will detail my vision of the immediate aftermath of The Rapture/TAKEN, from the world’s perspective.