On a side bar chat with SilverDoctors, Sunday, I indicated having been stopped out and repositioned shorts at higher level after seeing a huge Commercial Repositioning pattern on Friday.

SilverDoctors indicated they saw similar things and noted them in a post Friday and apparently the commenter’s were not happy.  Negative commenter’s are generally not happy or polite because they have little clue as to what is going on near term or what the big picture is in the metals.  All they want is instant gratification coupled with Blue Skies and have little to no patience or manners.

When I see a certain number of contracts expended in the Commercials mounting a top then I calculate the width of the drift to set stops.  Didn’t work for me this time but that is quite okay.  You learn from miscalculations and get better.

Appears to be more of a war going on in gold.  If you notice the massive amount of contracts expended today (Wednesday) where the Commercials made a pointed cone, sort of like the Tin Man’s Hat, with a position reversal flag on top,  around 75,000 contracts traded in 90 minutes, in gold, in that space to the flag top today then retreated to exactly the price point from where they came.

Last Friday’s COT showed the Silver Commercials had upped their percentage of shorts from 46% to 56% and since COT close Tuesday January 2 we know they are much higher.  They are as predictable as Hillary and Bill Clinton are crooked.

Looks like we are headed to a fake new year’s full frontal assault on silver, and somewhat gold, as the last quarter corporate sales results come into reporting.  Great (FAKE) economic news spells temporary disaster for the metals and it is always intentional, especially at option exirations.

What those Commercials do is Witchcraft via Blythe Master’s manipulating, sly come hither stare:

Strictly taboo are the Commercial’s ways courtesy of Blythe, long ago…

Don’t forget her!!!  She is a Blockchain nightmare ready to enter your dreams.

This metal’s lateral movement has all the looks of the same old tricks used to create depression in Small Speculators and Managed Money which tarnishes the allure of gold so various players like the Chinese and Russians can buy gold on the cheap and more importantly so the Elite’s get their fill before the world’s economies are crashed in July.

If you do not know why I say July, then read this:

As the DOW blows by $26,000 is anyone remembering my friend Martin Armstrong who predicted roughly DOW 30K in the Fall of 2015?  Anybody getting that déjà vous feeling?

At this rate, DOW 30K will happen by late June or early July and right on schedule!

Could it be that something virtually imperceptible caused the Elite’s world economic crash and cashless society to be physically moved from October 24 2015 to Tish B’Av 2018, which is exactly 1000 days?

What could possibly move a mountain like that?  Mark 9:29

As always, I do not give investing/trading advice to anyone except if you do not really know what you are doing and cannot call tops and bottoms, then buy physical on dips and hold it, period.

But be out of all paper by end of June and into hard assets.  Anyone still holding Bitcoin at crash time will lose everything.

From The Wilderness of Southern Illinois, stay thirsty for physical metal, my friends, 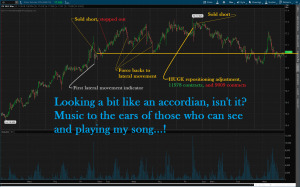