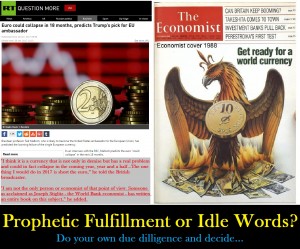 A year ago, January 26, I was scanning dozens of news sites, which is something I do every day, to ascertain trends in financial/economic, political, social/medical/health, and prophetic events.  What I saw on RT.com was unbelievable so I immediately wrote and posted Global Economic Collapse July 20, 2018 Tish B’av? with my thoughts but no one seemed interested to publish so it remained on my website, posted on Facebook and some shared Facebook groups, and shared with some close friends.

Many astute economic analysts were publishing warnings about global economic crash scenarios for 2017 so I waited patiently to see if my doubt and suspicions were wrong and unwarranted.  2017 passed without incident and the U.S. markets blasted off into the stratosphere very much like my end game scenarios written in Spring 2014 where I described and predicted 2015 capital inflows to the U.S. from all over the world just before the Global Economic Crash.  Martin Armstrong had long prediction similar scenarios for different reasons.

Now here we are in 2018, to the dismay of many great analysts, and still no Global crash though bubbles of all kinds are all around us, all over the world, and little to nothing has been done to alleviate the crash conditions that existed in 2008.  In fact, many, many  analysts say conditions are far worse now than in 2008.

Also to the great disbelief of almost all participants in the precious metals world, my August 2014 Silver Bottoms trough has held for 3.5 years.  There is not a writer/analyst in all of the economic analysts in the world who predicted such a thing and mine was not a true prediction just an observation of a trend.  But as far as predictions go there was no other analyst in all the world who predicted silver (and gold) would crash from their Winter 2012 $38-42 range to $15 either.  $15 Silver came true in Fall 2014.

It is very difficult to see a month in advance let alone 3-3.5 years in advance.

In recent months, I began including in my posts, the link to my original Tisha B’Av article so interested watchers would be aware of it.  Amazingly enough, SilverDoctors informed me that the highly respected X22 Report picked up my article and did a special show on it making a far better audio/video presentation that I did in my original writing.  And that is why I am doing this rewrite.

The X22 Report presentation of my finding is here: https://www.youtube.com/watch?v=Wb21hDIHu_k

The world has to know this coincidental possibility that the Global Elite tipped their hat or almost no one will be prepared if in fact the Global Economic Crash occurs this July.

The RT.com article https://www.rt.com/business/375130-brexit-trump-uk-malloch/  centers around an Elitist hobnobber named Ted Malluch https://en.wikipedia.org/wiki/Ted_Malloch  who was reported to be Trump’s pick for EU Ambassador.  Malluch wrote a book entitled “Davos, Aspen, and Yale: My Life Behind the Elite Curtain As a Global Sherpa” His interview references Joseph Stiglitz who is the former Chief Economist of the World Bank.  If ever there were a couple of people qualified to announce the Elite’s Global Economic Crash, these two guys Ted and Joe, are supremely qualified.

So, after reading the article and researching both Ted and Joe, I wondered to myself “what will the actual date be 18 months out?”  A quick calculation showed 18 months to be 547.5 days so in a spreadsheet I added that number to January 26, 2017 and it resulted in July 27, 2018.  Next, I went to the online Jewish Calendar and saw the date to be a minor Jewish holiday called:  https://en.wikipedia.org/wiki/Tu_B’Av  which is sort of a relief day of questionable Jewish traditions and a week behind Tu B’Av on the calendar is the extremely well know Jewish fast day of: https://en.wikipedia.org/wiki/Tisha_B%27Av

With their 1st Temple destroyed, according to the Scriptures, the Jews were exiled to Babylon for 70 years, one year for each 7th year Sabbath they had not allowed the ground to rest and recover while they trusted YHVH God for food in that Sabbath year.

The historical biblical Tisha B’Av entries are always God’s punishment of Israel for not keeping His Commandments and a very good case is made down through all history of the same events related to Tisha B’Av.

So, immediately the question in my mind was “what if I calculate the 18 months in prophetic time instead of Gregorian calendar time?”

Why calculate it in prophetic time, some might ask?

In several places in the Bible we are given prophetic time in terms of 30 day months.  The first instance is Noah in Genesis where the waters prevailed exactly 5 months and are a 150 day period.  There are no 31 day months in a lunar calendar because the lunar cycle is 29.53 days.  There are only 30 and 29 day months in a lunar calendar so the Noah story is communicating a special 30 day cycle.  Seven times, in the Bible, passages refer to a specific tribulation in Revelation by using an equal 42  month period, 1260 day period and a 3.5 year period.  They are Revelation 11:2 13:5, Revelation 11:3 12:6, and Daniel 7:25 12:7 Revelation 12:14

Prophecy scholars have been using those 30 day months for thousands of years to try and figure out when the time described in Daniel and Revelation begins.

By the way, I claim to have discovered exactly when that 1260 day tribulation period mathematically occurs and I can tell you it is definitely not 2018 as some think.  It is the following year.

Politicians love to announce bad news on Friday afternoons.  Americans and most of the world are preparing for the weekend, getting ready for the Friday night parties, watching major sporting events on Saturday and Sunday, partying on Saturday night, and generally closing their eyes and ears all weekend to bad news in the world perhaps drowning the news in their intoxicant of choice.  And by Monday there is usually another bad news story from somewhere afar and all that was buried in Friday’s news is forgotten…

So somehow, Ted Malluch, on January 26, 2017, in conjunction with Joseph Stiglitz, managed to very covertly indicate 2 consecutive Fridays 18 months far away in the future as the time when the EU might collapse.  And no one else in the world noticed.  The mathematical improbability of the sequence I present here is really huge!

And not only that but Ted Malluch indicated 2 Fridays surrounding the infamous day in Jewish history when their first Temple was destroyed and they were carried away captive to Babylon, for many, many decades because they failed to let the ground rest during God’s 7th year Sabbath for the ground and debt’s releases.  That plus all the multitude of other violations of God’s LAW that Israel committed for many, many generations!

This year 2018 is the 70th Anniversary of Israel returning to The Land and for the entirety of these past 70 years the nation of Israel and most of its farmers have not let the ground rest at all choosing to lease the ground out to Arabs so they will not be liable to God for using the ground and the contracts have a guaranteed buy back clause at the end of the year.  The practice, a legal loophole, was developed by a Chief Rabbi and is called “Heter Mechira”.  Long after Alexander the Great conquered Israel and the Middle East, in the division of Alexander’s kingdom there arose a Greek king named Antiochus who is credited with the historical “Abomination of Desolation”.

We know from Daniel, Revelation, and Yeshua/Jesus himself we are looking for another future Abomination of Desolation.  I am pretty sure I have found it in 2019 but that is a topic for another time.  This article merely discusses the setup preparation for future calamity.

You would think the Jews would have learned their lesson well the first time around wouldn’t you?

But they did not learn.  They fell again in false, manmade traditions and were conquered by the Greeks, then the Romans, then Yeshua Messiah (Jesus Christ) came along and spoke out against their false, manmade traditions and tried to restore the Father’s Commandments but they killed him and were finally banished from The Land in 70AD until Israel became a nation again in 1948.

Now, you might be asking yourself what do 2 Fridays surrounding Tish B’Av have to do with the rest of the world and what in the Bible has anything to with a Global Economic Collapse?

I’m so glad you asked as that subject I will save for Part 2.

Stay thirsty for physical metals my friends and buy all you can before July 1 2018 because after that time there probably will not be any left to buy and if the crash happens all paper fiat investments go to ZERO,