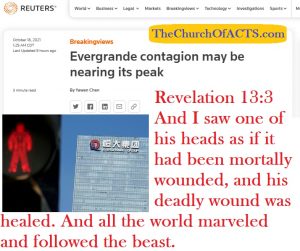 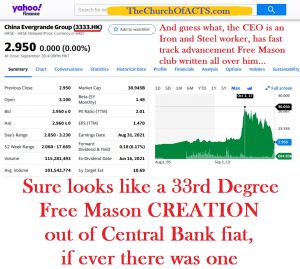 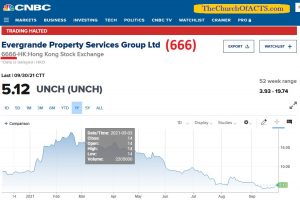 How does the company that all the world is watching for fear of economic contagion just magically get the stock ticker of 6666-HK on the American market and 3333-HK on the Hong Kong market?

Are we just 7 days away from Revelation 13:3 and Revelation 18:10 also known as the Great Reset?

Or will it take a few more days, than just 7?

Revelation 13:3 describes a “MORTAL WOUND” to one of the heads of the Beast system.

Revelation 13:3
And I saw one of his heads AS IF it had been mortally wounded, and his deadly wound was healed. And all the world marveled and followed the beast.

For many years, I have written the “MORTAL WOUND” of Revelation 13:3 is most likely the Global Economic Collapse we read about in Revelation 18:10

What constitutes a HEAD on the Beast?

standing at a distance for fear of her torment, saying, ‘Alas, alas, that great city Babylon, that mighty city! For IN ONE HOUSE YOUR JUDGMENT HAS COME.’

Many people have been expecting a massive derivative collapse to bring down all the economies of the world just like we see videos of massive domino setups collapsing:

They say we have about $2.4 QUADRILLION in financial derivatives, as of 2021.

These derivatives are financial bets, like in a casino, with parties and counter-parties.  All that is needed to collapse the entire global house of cards is one, single domino/derivative in the perfect well placed position, to bring the entire interconnected House down to ZERO.

Rick Wiles, at Trunews.com was the first person in history to warn the world about a vision he saw, in the late 1990s, of a massive derivative collapse totally destroying the world’s financial system.  Rick did not even know what a financial derivative was, at that time in his life.

Of course, the main and primary concern, in the 2008 financial collapse, was that the 1.5 Billion derivatives house of cards, would be ignited and bring down the global economy.

But U.S. Treasury Secretary Hank Paulson, and his buddies at the New York FED, and U.S. FED Central bank claimed they averted the global financial collapse through massive money printing on a scale never before seen.

There is much out in internet land pointing to October 24th, 2021 as the point in time the Great Reset happens or specific, significant events leading up to the Great Reset begin happening.

And at the very same time, we are seeing massive shortages, all over the world, in GROCERY STORES.

And not only in grocery stores, we are seeing massive shortages in all retail stores, including automobile dealerships, mechanics auto repair shops, and virtually no industry is untouched by these extensive shortages.

We see claimed computer chip shortages which trickles down to causing wholesale and retail shortages of magnitude never before seen in the history of man.

And at the very same time, we are seeing the upward spiral of all manufacturing commodities…

EXCEPT SILVER AND GOLD.

Of course, all of this is geared to scare people and create massive fear so all people, throughout the world, will take whatever JAB they offer as a way out of dying.

And without question, the covid jabs are the MARK OF THE BEAST.  Reports by many labs and scientists around the world show these jab vials to contain graphene oxide, stainless steel, magnetic particles, Asian parasites, chemicals used in cancer treatments to disable the immune system, and much more, and to top it all off most all of this is described in the patents the pharmaceutical companies have on all the technology in these vaccines.  And worse beyond imagination all the metallic components in the jabs have been proven to self assemble and that assembly capability is described in the patents.

Did Donald Trump’s Warp Speed team take a look at the patents before pushing the Emergency Use Authorization through the FDA?

Of course they did.

In the face of 1.5 years of numerous whistleblowers, scientists, researchers, medical doctors of all types, and probably the foremost of these, Judy Mikovits, Robert Malone, Luke Montagnier, and others exposing the horror inside these jabs – has Donald Trump retracted his support of the jabs or his shock they contain these horrific ingredients?

This is all a very carefully constructed plan, folks.

This plan has been around for decades now, as we review the patent research of Dr David Martin and former Phizer whistleblower and medical patent researcher Karen Kingston.

The patents show an INJECTABLE COMPUTER SYSTEM is being put into billions of people via these jabs:

And through all this common information now, Donald Trump has doubled down on his support of the jabs and maintains he is the father of the jabs and calls them in his own words, the Trumpcines.

My guess, and it is only an educated guess based on the prophecies, the current events, and personal firsthand knowledge is the Great Reset is about to take place, most likely beginning on October 24, in China.

Is that the day we see the first domino in the Global Financial System fall?

Or does the entire House Of Cards come down that day?

Remember, commodity markets do not open in New York until late that Sunday afternoon of October 24.

However, markets in Hong Kong are open on our Sunday afternoon on October 24 because it is already their Monday.

But more importantly, to this conversation, the currency markets are always open.

It is in the currency markets where the Great Reset must destroy all currencies, in order to bring about their one world digital currency system and ultimately bring about their total control over all humanity on the earth, through financial and united political means, and that is exactly what we see written in the pages of the book of Revelation.

If you think the jab mandates are hard now, just wait until the dust clears after the Great Reset and there is total mandate, through the use of the new Global Currency System, to jab every man, woman, and child on the planet.

If you think things are hard now, what is coming is the total nightmare.

And that total nightmare is plainly written in the book of Revelation.

The FED buddies who got all the REPO money: