Trading events in the early to mid morning Friday made it plain to me an intermediate top is in silver and probably gold with silver standing to lose more.

Contracts were sold for a nice gain.

That provided enough capital for enlarging the short sell at 140 to the downside with fairly tight stops just in case I am wrong. To me and my data, the Commercial Position Reversal looks fairly well assured though it is not as dramatic as some I have seen in the past.

In the charts, I provide the silver and gold snapshots I took during the action on Friday as well as the anatomy of the reversal taken today since metals are on holiday hiatus and the chart still looks like Friday.

I do not see a price rise from here in the numbers, at all, or in the daily action, at all, but this is a short term call. Most people have not done the research to realize how good those Commercials are in placing price where they want it, when they want it, and how they want it.

But I am very happy with the profit because I’m not greedy. We have coming what is probably a fair jobs report and retail numbers are said to look very promising and that sounds like opportunity for the Commercials to do their thing.

The Christmas present I suspected did not materialize but that was not a concern as I wrote last time because there was not much room to the downside and the previous COT after I wrote showed the Commercials at 46.8% Short and the Producer Merchant at only 24.7% Short and those are fairly extreme lows for them. This past COT the Commercials are at 48.8% and the Producer Merchant at 25.2 but since Tuesdays COT close there has been a LOT of action to the upside so those numbers have changed dramatically.

The point is to take profits when they come and get out, hopefully to a downward position, even if it is early as tops tend to be very quick and with little warning.

I am very good at calling bottoms but did miss a top once before. But I always get out somewhere before the top as it does not catch me sleeping. It is good to have rules on profit taking. Some people would say I get out too early but making a quick profit works for me and I don’t need to make the whole run to make good progress on building the contract base.

I don’t pull back the curtain on my methods to give trading advice to anybody. What works very well for me is not going to work for anyone else unless they understand the mechanics behind what I do, and how I see what I see.

But, if you have capital ready and are looking for a dip to buy physical this next week or so just might be for you. Merry New tax Year.

Now, all that said, they are making Bitcoin look sort of like a real market with volatility as much as they can before they take it to new heights soon and suck in loser’s cash big time… Did you see where a Bitcoin boomer got kidnapped in the Ukraine?

We also see China, Russia, the rest of the BRICS, Saudi Arabia and a few other significant players ready to create their gold backed economy do away with the USD fake paper Christmas side show. They are going to try but they are going to get slammed.

I also say Ted Butler (or his buddy) is right about the 10 year deal. By my count it is 10 years and 4 months but who else is counting besides me and you, Ted?

Did The Elite’s Announce The Global Economic Collapse?

Sending out a quick top sell and a disclaimer from the Wilderness of Southern Illinois, stay thirsty for physical metal when it goes down again. 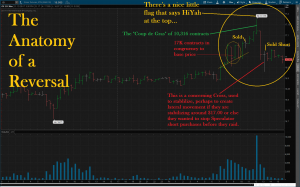