I’ve gotten numerous requests from around the world for updates on silver and gold the last few months and my apologies for not getting a roundtuit.

I enjoy writing about the metals but simply do not have much time these days to often gather my scattered thoughts on paper.

Not much in silver and gold have changed in the last 3 years and 2 months, as evidenced by the charts, but we are in fact moving hastily along to the moment they both crash deeply then rebound within minutes to a stratosphere few can imagine and only a select few can see.

A funny thing has happened on the way to the forum…  For many months over the Spring and Summer we saw grocery baskets full of articles telling us things were going to crash this late Summer/Fall.

No crash in sight.

In fact, one of my favorite postulators, Jim Rickards, seems to have been the latest casualty in projecting a possible October surprise.

A few months ago, I finally got the time sitting in the 90+ degree sunshine to finish Jim’s book “The Road To Ruin” and I give Jim a well deserved credit in the chart included.

All of Jim’s books are great history lessons and very important in gaining proper perspective in economics as it relates to politics, people, business and government – and understanding why things happen and when they will happen, i.e. the attributes of all systemic risks.

In “The Road To Ruin” Jim goes into much detail about something called Bayesian probability.

All of Jim’s discussion about Bayesian probability made a lot of sense to me because it goes beyond mere technical analysis or fundamental analysis or data modeling/regression testing.

Years ago, in my SD articles, I discussed my data modeling of gold and silver COT futures and how I came to predict in early 2012 they were bringing gold and silver down and that $15 silver was the target.  Sure enough, it happened about November/December 2014.

And where are we now?  Just a few cents above that $15 target.  And our favorite metals have been in the Silver Bottoms channels for over 3 years now.

But those who read my articles might remember I also discussed something beyond mere mathematical data modeling and that was the assignment of degrees of probability to phenomena I noticed visually on the behavior and chart patterns of longs and shorts open interest contracts just prior to upward or downward price movement.

That is where you step into the transactions – sort of like stepping into another dimension and you build postulates about what the trading guys (or algorithms) in the Commercial dark rooms are doing that causes you to see the chart pattern you visually see and that is something that cannot be fully, mathematically, data modeled.

Jim Rickards is one of the smartest guys in the room and I do not mean the dark rooms.  He got out of those places…

There is a much bigger picture than mere sector timing movements and ink blots on charts.

In a sense, in Bayesian probability, you are learning how to “remote view” what the bad guys are up to ON ALL FRONTS…

I, on the other hand from Jim Rickards, see the work of a master planner.  The work of the Master’s Hand, so to speak…

Jim should contact me and buy me a cup of organic coffee next time he is in St. Louis and I am pretty sure I could unlock a few secrets for him.

So, here we are, further along into Fall 2017 than many alternative economists and even a few mainstream economists thought we would get.  We passed 20 TRILION in U.S. National Debt and it was truly a “ho hum” moment.  And I do mean HO in the most destitute sense of the word.

We only have a few days left for a 2017 October surprise and after the end of the month all bets are off and everyone goes to Barbados, gets some sun, eats some rich  chocolate, and the focus is drawn to 2018, as Christmas presents are the most stressful event folks hazard upon after October.

We here in The Wilderness of Southern Illinois don’t celebrate Christmas, out of respect for God’s Son.  All anyone has to do is look at the history of Christmas and it is obvious true believers in the book of ACTS and beyond did not celebrate it either.  The whole sordid affair was built on pagan precepts and most of us now know not to do those things or else the wrath of God will become personal reality in various little ways called judgments also known as curses if you read Deuteronomy 28.

In January 2017, I wrote a brief article on when I think the Global Economic Crash might have been pushed to and “YES” I have come to think it was “pushed” from Fall 2015 to Summer 2018 and the Elite tipped their hand as to exactly when it will/might happen.  The jury is still out on why it was pushed but that’s my story and I’m sticking to it.

Jonathan Cahn did a great service when he wrote about harbingers and consistent 7 year, economic crashes, and his books made the world focus on the possibility God was behind the judgments those crashes rendered.  In the end, his biblical understanding was in error and so his proposed 2015 theory was bogus and I proved it was bogus but no matter Jonathan still did a great service.

The article I wrote discusses my simple theory as to why I think we have 9 months to prepare for the worst economic disaster in the history of the world:

In short, we are pregnant with toxic assets and the time to deliver the baby is rapidly approaching.

But no one should wait 8 months (hint) to prepare.  Silver is dirt cheap now and will not be available then just before the Global Crash.

Gold is dirt cheap as well.

Other articles I wrote said once the crash occurs the world economy would rise again from the ashes of national and international distrust to a worldwide gold standard (and with it silver standard) of immense magnitude and that all gold and silver would no longer be traded by gold bugs like us but confiscated (at a fair price) and marked to market by nations in the New World Order economy cashless society.

I’m pretty sure that crash happens in 9 months but understand clearly, it could happen tomorrow as there is very little remaining to be done for these Global Elite to accomplish before they bring all humanity into their tight control as economic slaves (and social/moral salves) for the remainder of eternity (so they think).

But what do I know?

I’m just the guy who predicted over 2.5 years in advance that silver would inconceivably fall from $38-42 all the way to $15.00  And, I’m just the guy who published the Silver Bottoms Channels in August 2014 that technical analysis has held completely and totally until now.

But what about silver these days?

I was only trying to help… 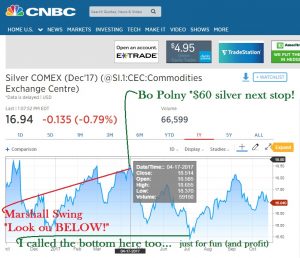 When silver finally hit the bottom the COT reports showed the Silver Commercials to be approaching just over 50% of all silver shorts.

Let’s look at the Producer Merchant more carefully…  They hold 9,316 longs and 69,744 shorts.  The Producer Merchant is approaching a ratio of nearly 8 times shorts versus longs.  That is a sure fire indicator they are setting the stage for a big drop but they have not yet reached the high 60s/low 70s percentages of some past massacres.  They don’t have to, by the way, cause we could easily drift back into the $18-19 range and they will simply add a much greater percentage of shorts for their future not-to-be-denied frontal assault.

These boys are not in business to lose money or to merely place hedge bets as I saw one writer who questioned Ted Butler, recently.  I challenge that writer with his 3 terabyte database to show us exactly how a certain Commercial commodities “hedger” made BILLIONS annually from a penny there and a penny here on placing short hedge bets for clients.

Let’s see if he will take the mathematical challenge with his database and show us mathematically how all those gains over the years resulted in all the billions in commodities profits on particular Commercial’s books?

Now, back to reality and silver…

Every time silver or gold get slammed the number of shorts on the Commercial’s books go DOWN. Every time.  Not just some of the time but every time.

And every time silver and/or gold price rises the number of shorts on the Commercial’s books go up, up, and away.

That reminds me of a tune I loved when I was a kid, not because it was in a 5th dimension, so to speak, but because I could hear it had real jazz possibilities.  Here, Doc Severinson does a masterful take on inflated balloons:

Doc Severinson – Up, Up And Away

and here the late Sonny Criss makes the balloons bend to his will:

Sonny Criss Saxophone – Up, Up And Away

Now I would like to hear someone do Up, Up And Away to some Frank Mantooth or Bill Evans altered harmonies but have not found that yet.

And later in 2011, the Gold Commercials allowed gold to rise to the stratosphere only to methodically use their shorts and their CME connections to send gold to inconceivable lows, as well, to never recover, just like silver.

A few months afterwards in very early 2012, I issued the result of my data modeling and probabilities that the Commercials would take silver to $15.  All the rest of gold and silver analysts were expecting new heights into the $60s+ for silver and $2000+ for gold.  All of them!  What could I see but they were blind to…?

Are they still blinded?

All this was a portent to what the Commercials are going to do in a couple of days in the very near future when both gold and silver crash on cue and rebound well past the moon.

The setup for this event is being done in most markets now with balloons everywhere, sort of like the annual Forest Park Balloon race in St. Louis every year: 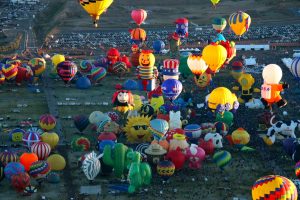 Everywhere you look, related to finance and economics, there are balloons.

Many, many, many balloons.

What happens when you take a really big balloon filled with toxic gas, in a room full of balloons, and strategically pop it?

They all go down in flames!

Still reporting once and a while from The Wilderness of Southern Illinois where in the last hour of trading, up to 2:30PM CST 11,783 silver contracts traded, price bumped up a dime in the first half hour then curiously returned down a dime in the last half hour, as if by magic, which indicates something I have previously called open interest repositioning which might indicate price will continue slowly or more quickly down a short distance as it has since they have been carefully managing price down since the previous Friday over a week ago, according to my Bayesian probabilities guesses…