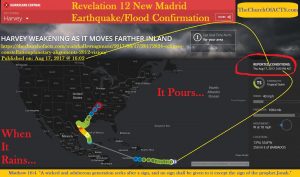 When it rains, it pours…

On August 17th, early in the day, I received the release from YHVH to finally write down the first vision He gave me concerning the 2019 New Madrid Earthquake and Flood.

I’m not a fast writer and it takes me many hours to organize a simple article, write, check it, and finally share it.

Even then I usually make several grammatical errors I find later and those changes are made and sometimes I also add to an article when I read it again and my thoughts are more clear so I can perceive with the perception of what I wrote, in the eyes and mind of a reader.

In social media, for several years now, I have made allusions to Revelation 12:14, and when/where it happens.  Those references are usually comments in posts on Facebook and one would have to go through my extensive timeline page to find them.

I have waited for close to 5.5 years since receiving the first vision to get the release to write it down for public consumption and let the stones fall where they will fall no matter how much it hurts me.  I am very shy about everything I write because I do not like public attention.  That sounds strange coming from someone who has been  published and all around the world on the subject of precious metals, gold and silver, and my unthinkable, accurate predictions but I assure you I would trade it all tomorrow for a cabin on top of a mountain in North Carolina where I could but talk to YHVH and live in peace with my family.  But I can’t.  I cannot help but write what I write.  I have never made a single penny off of anything I write, have no future profit motive, and I really do not desire public recognition but I have to write what I write and am driven to do it.

The prophet Jonah had the same problem.  Running from orders did not work for him, either.

So, on August 17 I penned the first vision then shared it with a friend who runs http://themostimportantnews.com/  Then a couple of days later shared it with a friend who runs http://www.silverdoctors.com/ then with a couple of  others I know in religious media as well.  I thought that would be the end of what I would write on the subject and the rest of the time would be spent defending myself and the vision but then Hurricane Harvey came along as YHVH sent dramatic and severe judgments upon Texas.

Yesterday, I noticed a USAToday article with a NOAA (National Oceanic and Atmospheric Administration) projected path picture in it and realized I had to write again as YHVH was confirming the first vision and giving evidence for all to see and know that He is YHVH.

And again, I thought that would be the end of it…

Last evening, a friend who says he lives in Houston private messaged me on Facebook.  He has gotten a bit wet but his reason for messaging me had nothing to do with Harvey at all but quickly Harvey came up in the conversation and he mentioned that as soon as he saw Harvey had crossed the Yucatan he knew Harvey’s path was going to be TROUBLE.  As soon as he said the words “cleared the Yucatan” and trouble then the word TRACK entered and my mind lit up with curiosity because a still small voice said “Look and See”.  So, my immediate thought was “when did that Hurricane begin”?

I did a search and up popped a page on Weather.com about Harvey and it had a beautiful picture from start to present and projected path.  Then I noticed to the right side there was a date and timestamp which reflected the present and the thought occurred to me “can I click the little circles and see the date timestamps of the stages”?

So, I clicked the beginning circle and up popped August 17 5:00PM AST…!

And I think to myself “YOU have got to me kidding me, it is the same day I got the release!”.  Little did I know the rest of the story…

In the Caribbean where Harvey formed, they use AST – Atlantic Standard Time – all the time, Summer and Winter.  There is no need of daylight savings time usage as length of days there do not vary as much as they do in St Louis, MO or in Alaska.

There is 1 hour of time difference between AST and CST where I live.

That means the date timestamps on the beginning tracking of Harvey and my first vision post published in WordPress are virtually identical separated by seconds.  But that is hardly all the story.

When I write an article I do it in Outlook usually where I control the time duration of automatic saves to disk and I set saves for every minute or less sometimes less so I never lose significant writings because of system failure or display device failures.

I began the creation of the first vision article many hours prior to entering it into my WordPress where you see the date timestamp on the picture.

I received the release from YHVH to finally pen the first vision many hours before Harvey was recognized by the NOAA and tracking was published.

I wrote in my Hurricane Harvey confirmation article that the release came on August 17 and have told many people that as well but I did not know until late yesterday, near midnight in the evening, that Harvey and I had very similarly timed beginnings.

Maybe eight hours before Harvey began to be tracked, YHVH gave me the release to write about the Revelation 12 first vision.  I was not even through the first mug of coffee that morning!

At about the same moment Harvey began to be tracked I published the article and began sharing it with media.  I would not hear there even existed a Hurricane Harvey for almost a week later.

And about 5.5 years before I knew anything about Harvey, and before the 2017 Eclipse, and before the 9/23/2017 Revelation 12 sign where constellations and planets align – YHVH showed me what happens and what it means.

The Bible is full of events just like this where YHVH tells His people what is going to happen long before it happens so they can prepare themselves.

The Jew’s were not laughing in 70AD when Josephus records about 1,000,000 of them died defending Jerusalem’s fall just as Yeshua/Jesus told them would happen about 29 years earlier when he said the Temple would have no stones left standing.

The followers of Yeshua were not around for the fall of Jerusalem.  They obeyed the prophecy and got out of the way since they were well warned.

The followers of Yeshua knew all too well his commandment to never take up the sword again and they would have no part in the rebellion and defense of Jerusalem.  They were commission to preach The Gospel not to start or end wars.

Those who killed Yeshua, and their followers, stayed in Jerusalem and died and peace has not returned to that Land until this very day.  They are now awaiting Zechariah 13:8

I leave you all with Yeshua’s/Jesus’ words and this simple advice that you leave no stone unturned in discovering and knowing your Creator and following all that He says to DO:

Matthew 6:33  But seek first the kingdom of God and His Righteousness, and all these things shall be added to you.

Yeshua’s/Jesus’ instructions are to live by the Righteousness of his Father in keeping his Father’s Commandments.

Do not be found in the groups of people that do not seek YHVH God the Father’s Righteousness and perform it/live by it.  They will not heed to warnings of destruction and get prepared by living Matthew 6:33