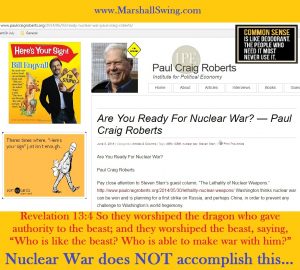 So, what is going to happen to gold and silver tomorrow April 7th when the monthly jobs report comes out?

I did not write today to predict tomorrow’s smash but I thought I would just throw a provocative thought out there and see what happens!

What I did want to comment on is stupidity.

I have always sort of enjoyed Paul Craig Robert’s work and writings but seeing this today left me astonished at first then I felt the urgency to remind folks what the prophecy says and how Robert’s ideas do not play into the prophecies, as if the prophecies matter to anyone…

Are You Ready For Nuclear War? — Paul Craig Roberts

For 4 years in the USAF in the early 1980s I was stationed at Minot AFB, ND which is the 3rd largest nuclear power in the world and you get a very good idea of what will happen in the event of a “first strike” when you recount all the weapons.  I got to see those missile silos up close and personal and had many friends with missile launch codes and many friends who flew and navigated those B52 bombers full of nukes.

Taxpayers pay the military to figure out a multitude of plans of attack in any conceivable scenario and these planning games are planned and simulated just about every day of the year for many decades now and the public and press is not privy to all this, nor should it be.

Nobody wins a nuclear first strike.

Nobody wins a nuclear first strike even if you have an anti-ballistic missile shield.

And no anti-ballistic missile shield the U.S. has can stop the thousands of nuclear devices Russia and China have.

So, what is going to happen?

Here’s my scenario and I wrote briefly about it in 2015, once before here…

Then, suddenly, as if by magic, this scripture is fulfilled and the stage is set:

Now, all you have to do is figure out how Revelation 13:4 fits in with all the other “beast” scriptures and VIOLA you can see how everything plays out…

I mean seriously, WHY do you surmise the U.S. Government took everything of Nicolai Tesla’s and have taken much of what subsequent people developed?

So, when does this event happen?

My guess is sometime in the Summer or early Fall of 2018.