Welcome to my “Sunny Side Of The Street”

I just hate people who say “I told you so…”!

Proverbs 1:5  A wise man will hear and increase learning, And a man of understanding will attain wise counsel

Proverbs 19:20  Listen to counsel and receive instruction, That you may be wise in your latter days.

It seems many things are planned by various counsel but you only wage war when you have WISE counsel:

And the scriptures say there is definitely a problem if you turn to those who analyze future events by inappropriate methods:

Isaiah 47:13  You are wearied in the multitude of your counsels;
Let now the astrologers, the stargazers,
And the monthly prognosticators
Stand up and save you
From what shall come upon you.

I do not know WHY anyone would look at the multitude of technical analysis ink blots when you have hand delivered , for all to see, every Friday the culmination of trading up to the previous Tuesday, the COT numbers which I have proven to be accurate, definitive, and reliable for predicting the future of silver and gold price movements…

A month ago, on the world’s happy hearts day, I published my COT analysis indicating a fall from grace in the metals was imminent.  When the monthly menstrual cycle passed and there was no smash crash, writers seemed to declare the Speculators/Hedge Funds had the upper hand on the Commercials.  Then on March 3 the inevitable happened as predicted and the metals were SMASHED.  A little…

But none of those other silver and gold prognosticators listened as they continued to paint rosy pictures of blue skies with silver and gold linings.  At least up until March 3 when the short covering price killing Silver Commercial Flood came as foretold…

So where are we now?

It ain’t looking good for one Bo Polny’s May prediction, AT ALL…

We’re staring an expected interest rate rise in the face and the market is not blinking, AT ALL.

In fact, I think the puppet masters are just waiting with GLEE to raise the interest rate and suck the masses into equities…

They have even hammered the price of oil, A LITTLE, in advance, in order to set up their next debacle.  Ever wonder WHY the world’s eyes were “focused” on OPEC for weeks, months, and years AS IF OIL PRICE WAS THEIR PROBLEM AND THEY WERE SOMEHOW AT FAULT FOR THE WORLD OIL GLUT and causing weak economies around the world?  Ever ask yourself WHY as soon as OPEC cuts a little and oil price rises and economies miraculously start feeling better and better THEN U.S. oil production takes a dramatic rise and suddenly we are in yet another oil glut and all the articles come out making OPEC look like the bad guys?  SO WHY, are not ALL the oil producers around the world in OPEC and forced into production limitations as well?

Well, there’s no control if the CONTROLLERS submit themselves to limitations, is there?

Unless something MAGIC happens, Bo’s latest declaration is headed for that huge scrap pile he has been amassing…

I want to digress for just a moment and discuss one reason WHY Bo Polny met with so much disappointment in his calculatations.

And for the record, I want to submit I think Bo Polny is a very, very smart guy and whoever helps him are smart as well.  Anyone who can figure out the 777 thing is SMART.  Those familiar with the math of his calculation know there were TWO 777s in his use of differing day lengths.  BUT, just being able to find such a needle in a massive haystack completely impressed me!  But, the nutshell of Bo’s debacle was using faulty data and faulty assumptions…  THERE WAS AND IS NO SUCH THING AS 29 Elul in the prophetic calendar or in the course of the 7th Year Sabbath Sabbatical.  It does not exist and for all those who followed Jonathan Cahn, as much as I like the heart of the guy and his enthusiasm Jonathan was also misusing faulty data built on the back of a religion called Judaism that is not the approved religion we see in Exodus or anywhere in the Bible.  THERE WAS AND IS NO CALENDAR of Judaism that accurately displays the real 7th Year Sabbath or “year of release”.  That also took down Jeff Berwick, another REALLY smart guy…  THERE WAS AND IS NO CALENDAR of Judaism that accurately displays the real JUBILEE YEAR national Sabbath or “year of restoration of lands”.  THOSE THINGS DO NOT EXIST ACCURATELY ON ANY POPULAR CALENDAR.

In 2015, I wrote articles explaining the Elul 29 fraud in some detail.  Judaism simply and fraudulently twisted the “year of release” and placed a release date at the end of the 6th month, called it Elul, and also simply and fraudulently twisted their calendar to reflect a year count which is now 5777 and proclaim Jubilee when any 5th grade scholar that can Google knows their calendar omits VAST swaths of time in order to eliminate the possibility that one Yeshua Messiah (aka Jesus Christ) could possibly fit neatly in the time line of Daniel’s 70 Weeks prophecy…  A simple Google reveals all the information anyone needs to know that the Jewish Calendar is AN ABSOLUTE FRAUD.

Yet, many people get sucked into thinking and believing the Jews must be right and they, not doing their own due diligence, start promoting the calendar of that false religion (I say false because Judaism intentionally twists and manipulates God’s Commandments from being recognized) and then writing analysis based on false calendars and times.

The Scriptures do not speak kindly towards anyone who would promote false times/calendars like Judaism DOES:

So, Bo Polny, Jonathan Cahn, Jeff Berwick, and many other fine writers were led astray by the twisted calendar and false times of Judaism.

Time to come home to real Truth, guys, as you all are zealous servants deserving of better.  The choice is yours.

And now, back to the silver and gold COT reports!

A month ago, the Silver Producer Merchant Commercial held 37.3% of all silver shorts, as of 3/7/17 they hold a crisp 41% of ALL silver shorts! 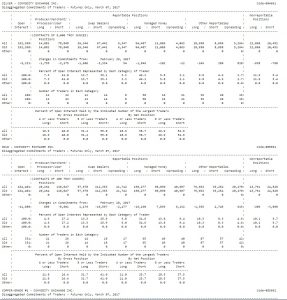 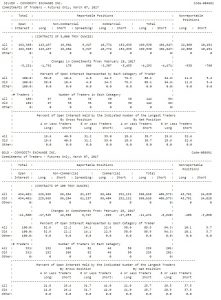 YHVH God’s Son did not give this commandment so that latter day believers would get blindsided by the coming Global Economic Crash.  Just like YHVH God told Moses to tell the children of Israel to get gold, silver, and precious stuff from the Egyptians, God’s Son told the Apostle John to make sure the latter day believers knew, when they saw the storm clouds of Revelation on the horizon, to not be ignorant BUT TO BUY all the gold (and silver) they could so they would not be poor:

God’s Son was not covertly talking about some “SPIRITUAL GOLD” that is not defined anywhere in the Scriptures…  He is talking about using money TO BUY gold.  Period.  All the gold in the world belongs to YHVH GOD as do all the cattle on a thousand hills.  You think those are “SPIRITUAL CATTLE”?

Back to the COT…

“Wait a minute Marshall, you mean those evil, scum Commercials smash crashed silver (and gold) and they even increased their stranglehold on the metals?”

That is EXACTLY what happened…

That is EXACTLY what I said would happen…

Still making the predictions that come true from the luxury of The Wilderness of Southern Illinois where I will try my best to write a COT analysis about once a month with other articles somewhere in between, stay very thirsty for silver and gold my friends,