I watch the silver and gold numbers almost as avidly as I did during the years I was writing a weekly COT report and analyzing the numbers for readers.  I have urged people to not be very concerned at what price they buy silver but that they have it at all costs.  From around $18 thru the time my silver prediction came true at $15.00 and below, then as we approached the start of Daniel’s 70th Week on 9/23/2015, I urged people to buy with all available cash they could muster.

Now, when I watch the daily and weekly numbers, I have to hold myself back from writing articles because my buy advice has been in place for over 2 years and has never wavered and I don’t sell metals or newsletters for profit, though it seems like a good business.  I have to be my calling to not personally profit.

The last time I commented on silver and gold was a quarter ago in November last year and while I might start commenting more regularly it will not be to aid anyone attempting to make short term investment decisions as I did in the past but rather urging them to buy with all cash they have and can get their hands on safely and legally.

Holding physical silver and gold was/is a long term strategy which I firmly believe has an end in the very near future.  I now think that end time is about July of 2018 and a little later but understand the Global Economic Collapse could come at any time.

Notice almost 3 years later we are STILL in between the Silver Bottoms troughs I coined in 2014:

The Global Economic Collapse is dependent upon a couple of things happening and I am sure the number one item is the Global Elite being totally fed up with their usurpation of power as nationalistic efforts continue to eat away at their governmental successes and various nations, the BRICS in particular, know that it is only a matter of time before their growing economic power would permit them independence from the Global Elite.  The Global Elite know for a certainty when that time is.  The other dependency is YHVH God granting them the go ahead to make the move to enslave all the people of the planet, economically, and thus socially and morally.

It is not as if the Global Elite petition YHVH God for permission.  YHVH controls the minds of those Global Elite just like He controlled Nebuchadnezzar, Sennacherib, Cyrus, and so many others He used to bring judgment upon Israel or bless them.  The timing of all these things is not by chance it is in the palm of YHVH’s Right Hand.  These things are appointed times in history and are in fact His Story to reveal to everyone even though it is all revealed in the Scriptures. 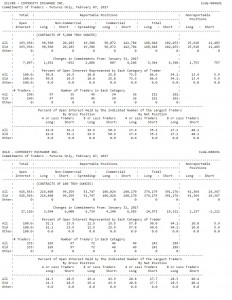 What happened between November and now?  Elementary dear Watson, silver price was attacked, dropped, and then the Speculators somehow got the vain idea a bottom was in and they began hording longs again hoping to break the STRANGLEHOLD of those Commercials in hopes of the day price takes off like a rocket and never looks back at Sodom and Gomorrah (The Commercials) as those Commercials bite the dust and the Righteous holders of paper fiat longs are justified for their good deeds.

AIN’T GONNA HAPPEN, DON’T EVEN THINK ABOUT IT.  FUGGET-ABOUT-IT! 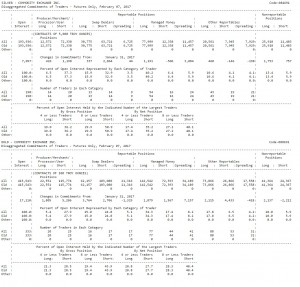 The interesting thing about Speculators is they get a whiff of a claim somewhere out in California and their noses defy reality, they tend to not do their homework, and most of them lose most of what they invested and this time is not going to be any different.  Well that was the 1840’s and even though most speculators lost their shirts and were shorted by the big boys with massive financial backing who could weather the tedious storms and buy up the speculator’s claims, those speculators got their whiff of gold in them thar hills and left home and family without doing much research.

Times really have not changed much…

To this day, no one else can accurately predict silver and gold price changes in the short term or accurately in the long term.

Most everyone, the less than 1%, who hold physical silver and gold know a lot about mining, industrial silver use, debt, paper fiat, FED corruption, the Global Elite, the big bank’s manipulation of the metals, and the ever increasing likelihood of systemic, global, financial failure.  The rest of the lovely people merely like the way silver and gold look and feel in their hands and around their bodies, and makes their electricity and computer devices work.

Even though I gave away virtually all the keys to accurately predicting silver and gold price in the short term and long term, to this day no one appears to have put it altogether, and heeded those instructions, and done the due diligence to do the math to figure out just how you watch the numbers, recognize and apply the rules, and then know where price is going short term and long term.  Maybe someone out there is trying but I don’t see them stepping up and making claims to better price analysis and prediction.  Maybe I just missed their articles…

The Commercial’s have greatly strengthened their hand in the short percentages while they have allowed price to rise steadily again since the beginning of 2017 to about $18 in the last couple of days.  The past reveals when their short hand gets stronger, those Commercial’s utilize a computer driven HFT price drop and short covering price deflation at regularly scheduled times in their future and quite to the dismay and depression of Speculators.  When the percentages are this strong in their favor, those Commercials can allow price to go even higher and not have to worry even a single thought as to Speculator’s gaining enough long position to unseat their stranglehold on power and price.  They buy offsetting shorts on the way up so they can quickly kill price and reap huge profits on the way down over the price cliff.

I like the “alligator’s jaws” in that Silver chart!

But do you follow this one with some even wider “jaws”? 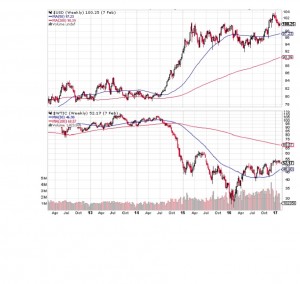 The appointed time of the Global Economic Collapse IS coming.  It is near.

Aren’t you glad my Fall 2015 guesses as to the placement of the appointed time were incorrect or that the plan was altered somehow?  Sometimes, what appears to be a blessing can be a disaster in disguise!  It can be a blessing IF you have used this time to prepare even more and purchase silver and gold at ridiculously low prices.  It will be a disaster if you have ignored all the warnings, have not done your due diligence in all areas of your life, and are still playing the paper fiat investment game while waiting to see if any of these things comes true.

Those 5 foolish virgins were/are SHUT OUTSIDE along with their blemished garments for the purpose of seeing how they would do under intense pressures for 1260+ days.

I see July 2018 as a drop dead point for the Global Economic Collapse and the Global Elite may have already released their intentions towards that time frame.  Time will tell.

We will all watch events leading up to that time even though most of us think the Global Economic Collapse could happen any day now and many writers have said last year and this year were/are, in fact, THE YEAR.  Well, last year was not THE YEAR was it?

The issue is being thorough and being prepared, not merely knowing when it happens…

Still keeping warm in The Wilderness of Southern Illinois, stay thirsty for physical silver and gold and keep ALL of YHVH God’s Commandments,