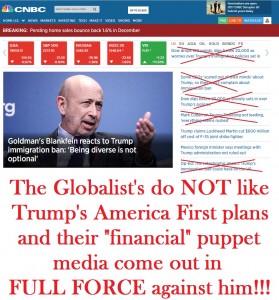 The Globalist’s are coming out in full force to denounce Donald Trump and his Make America Great Again plan!

They are pulling out all the stops in their beastly “organ” in order to discredit and turn the people of the U.S. and the people of all the world against The Donald.

They are the same people who financed the World Wars and made sure the evildoers had the economic capacity to kill MILLIONS of innocent people and enslave them if even for a short while.

They are like the very same Globalist Elite just like Prescott Bush who made sure Hitler was a financially well oiled machine.

They are ruthless killers who will stop at nothing to force their economic slavery on the entire world.

And they are written about in the book of Revelation!

They are written about extensively in Revelation 17 & 18.

It is very obvious those chapters are discussing a world economic system, trade, goods and services, and most of all CONTROL over all individuals through many means to shape them into nothing but consumers for its bidding and wealth.

It is an economic system that hates all things “religious”, and with good reason and Revelation spells out WHY…

The WHY is secreted in history and few read the words in Revelation carefully enough to see the reality.

The Harlot of Revelation rides the Beast financial economic system!

Who is the Harlot?

The Beast financial economic system is sick and tired of the Harlot riding it and does this:

Revelation 17:16  And the ten horns which you saw on the beast, these will hate the harlot, make her desolate and naked, eat her flesh and burn her with fire.

The Harlot rode the Beast for many, many centuries!

Now, right before your every eyes Revelation 17:16 is in the final stages of being played out over many decades and almost no one knows it.

Beginning in about 325 CE, the false church in Rome took over the economic affairs of almost all the world by controlling the armies of the Beast financial, economic, social, and political systems.

Throughout history the false churches have been in control of almost all things financial, economic, social, and political, UNTIL RECENTLY.

When Martin Luther in the early 16th century took deference to a small portion of the THEOLGY in Rome he and many following him bolted and formed an alternative religious system in Germany and other areas away from the Harlot in Rome.

The Protestants formed their own version of the Harlot and soon became powerful and fought many wars with Rome while controlling vast economic empires themselves.

These false THEOLOGY religious systems soon controlled all the earth either directly or indirectly through economic and forced social acceptance demands if dissenting nations sought to be independent.

A false THEOLOGY or HARLOT is anything, repeat ANYTHING, any religious system that reveals itself to be against the Commandments of YHVH God which He gave to the Children of Israel in The Wilderness at Mt. Sinai.  All valid biblical definitions come from what is written in those pages between Exodus and Deuteronomy.  Judaism is a HARLOT because she adds to YHVH God the Father’s LAW by forcing people into extra-biblical requirements and that is what The Son of God was against and what we know today is called Talmudic Judaism!

So, you are watching Revelation 17:16 being played out right before your eyes the only question is can you see it and make adjustments in your life and relationship to Almighty God, keep His Sabbath and all His LAW, before it is too late?

So, why are all the celebrities and banks and financial systems up in arms?

Because President Donald J Trump is making good on promises to upset their exclusive apple cart and take care of the people and end the financial, economic, and social slavery.  This has the potential to destroy the Global Elite and their wealth by deregulating small businesses so they are free to compete with the satanic Global multinational corporations who are the Global minions of the Beast system and the soon to be  enthroned Beast man…

So where does Donald Trump fit into that prophetic picture?

According to the prophecies, The Donald will either knuckle under to the special Global interests or he will go down swinging…

My bet is on the latter.

Still in The Wilderness of Southern Illinois and writing a few more reports these days!

Get all the physical gold and silver you can get NOW before it is too late!